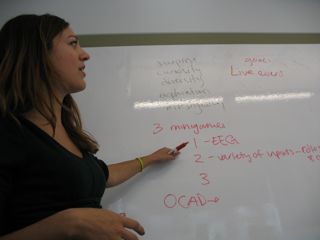 This week was mostly “heads down”: working on the discussion paper. But I had a bunch of good meetings, too:

Sunil Sharma is spending the next several weeks helping OCAD build connections with companies. On Monday I gave him a brief tour of the main campus, and we had a great chat about the possibilities and potential. He sees designers having a critical role in startups, and anticipates that their contribution will come to be seen on equal footing with business and technical people.

I had another great meeting with Monica, in which we outlined ideas for a new financing initiative. I had lunch with Jesse on Friday, and we talked about the Urban Ecologies conference in June, which he’s leading. And I had coffee with Miriam on Wednesday — it turns out we have a lot of common interests.

And we had our second peer critique this week. Each project got a full half-hour, so we were able to get much more in-depth, and all of the teams got valuable feedback. Thanks to Loretta, Mark & Jess, Mandad, Stephanie and Henry!

This entry was posted in imaginationcatalyst. Bookmark the permalink.