[This update on my Twitter cluster visualization project is also the final report for the independent study I’ve been doing on infoviz. I’ll definitely pick up this work again soon, but not in the next couple of weeks. A previous post with some of my early tests and rationale is here. A walkthrough on how to get started making these is here.]

For the past few months I’ve been absorbing lots about information visualization, and in the past four weeks I’ve been doing a bunch of work specifically on visualizing clusters based on the Twitter network. The goal of this is described in a previous post. Along the way, I’ve learned a weird bunch of other things: tuning MySQL performance, the advantages of the Google Social Graph API over the Twitter API, how to get around the fact that many of OCAD’s lab computers are still running OS 10.5, how to make a screencast, etc. I want to take this work in a bunch of other directions (and will, once I’ve dealt with my other deadlines). Here’s some of the more interesting maps that I produced along the way: 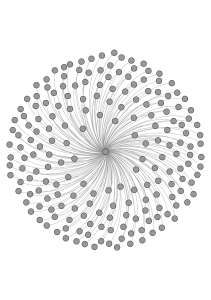 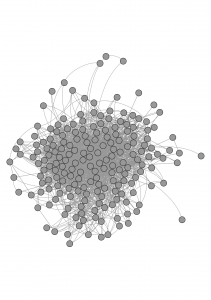 The same data, but now with clusters identified: 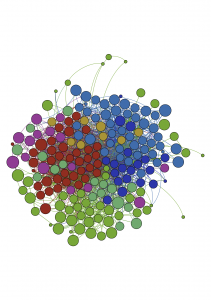 There are 7 “communities,” which correspond (awkwardly!) to these real-world communities: art/foresight/big data; toronto; toronto tech; cfc/ocad; vancouver/montreal/academics; social innovation; other.

Now we go larger — 6528 nodes and 30599 edges. Which is everyone I follow, and everyone they follow, but filtering out those who are followed by less than two people in the rest of the network. This is where the built-in clustering algorithm in gephi starts to sturggle: it identified 103 clusters: 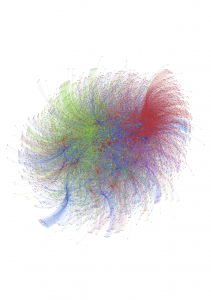 This is the same data, but those with fewer than 3 followers in the network are filtered out, as is any user with more than 4000 followers (from anywhere, not just this network). The number of clusters came down to 30. 2674 nodes, 14376 edges: 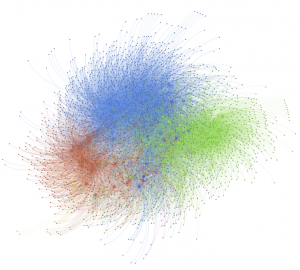 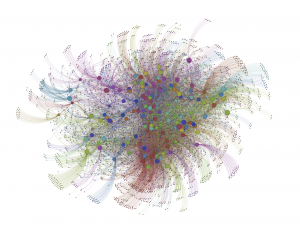 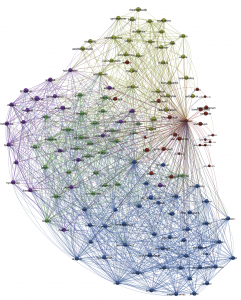 On paper, it looks way better with a black background. Maybe on-screen too?: 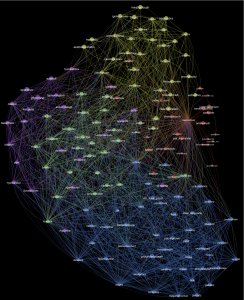 And a screencast of it coming together: 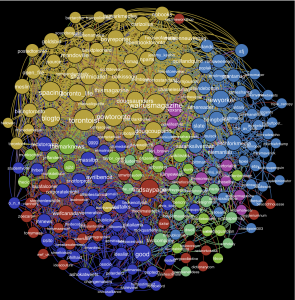 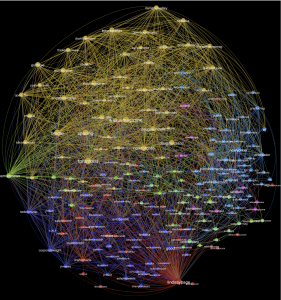 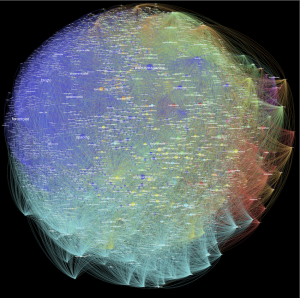 I played around a bunch with making maps of two or three people’s networks at once, to see how closely they overlap. I found it much more difficult to make them legible. Here’s one that turned out ok. It’s all of the people that I follow, and all of the people that Greg follows. 568 nodes, 11732 edges, 8 communities. Node size corresponds to the number of followers that person has. Two versions, same data, just a different rendering (there’s an element of randomness to the process): 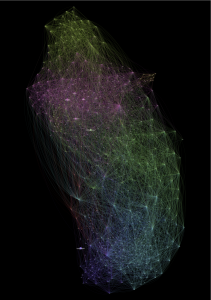 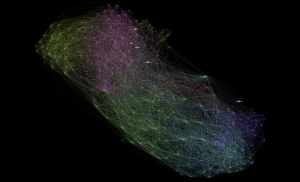 I also made of screencast of this one:

In his presentation at Strata about prototyping with data, Tom Coates from Nokia said that through experimentation (play?) and prototyping, you “start to develop a colloquial understanding of the data…” which is very valuable for when it comes time to develop actual product ideas.  I’d forgotten that comment until partway through this work. I was super-proud of my first few maps, but they look really awkward now. Over these few weeks of working with this data, I’ve made progress in figuring out how to handle it in the first place, how to make it more legible, how to make it look better, and, in a way that I can’t yet describe, how it works. I’m not yet at the product development stage, but thankfully that wasn’t the goal.

The places I’ll go with it next are:

This entry was posted in infoviz. Bookmark the permalink.